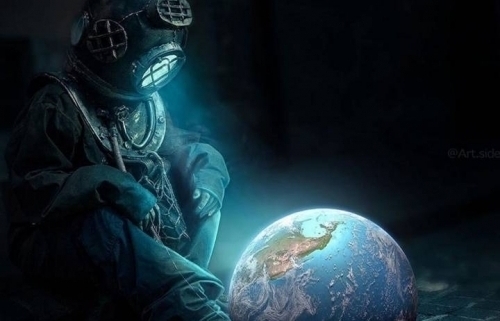 So, what is meant by, sacred truth, you ask? I’m not referring to “truth” as purely “religious” or only as a Divine revelation bestowed upon the faithful, but truth as tantamount to the ideals of respect, trust, and fidelity. It’s a truth that fills you with faith and assurance enough to dare being vulnerable outside yourself, while instilling a sense of mystery and wonder as to where that vulnerability may lead. It’s a truth that speaks boldly to power while maintaining awareness and understanding of the broken humanity behind that power.

In the years leading up to the worldwide Covid-19 pandemic, another pandemic was already in the throes of infecting our collective psyche. Those with power, influence, or other self-serving motivations have been creatively finding “alternative” ways of managing reality. Many of these managed realities (conspiracy theories, etc.), once established, have created a near airtight bubble intended to funnel propaganda and to influence the adherents they attract with cult-like potency. Whether it’s politics, science, medicine or religion, the powerful and influential have mastered the art of not just influence, but near mind-control over their perceived minions. They continue to apathetically fracture the soul of our nation for political, sometimes ideological, and often monetary gain. The Covid pandemic simply opened up windows of opportunity to a degree most of us have never seen before.

To navigate these muddied waters and discern actual truth from ‘alternative’ truth, we must wander aimfully. Many factors, including social media, have made navigating what’s “actual/factual“ from what’s nefariously “conceived/perceived,” an inevitably exhausting task. Sure, you could use your gut instincts and just jump straight into this thick mist of misinformation and fracas of pseudo facts. Of course, that may lead you from one cesspool of lies and half-truths to another. You could also decide to simply take aim to scrutinize, fact-check, and research every suspect postulation you come across using the scientific method or other sound investigative methodology. Though, that time-consuming approach would most likely lead to any number of resultant conditions including mental exhaustion; divorce; loss of friends; questioning your very reason for existing; and losing any remaining sense of wonder in life.

To wander aimfully and wonder always is to combine the reason and intellect of a steely-eyed skeptic, with the soul of a wide-eyed student of truth and life. It’s being “wise as a serpent and innocent as a dove” in rooting out, at the source, all and everyone that seeks to create a false altar of “truth.”

The starting point is being honest with yourself, understanding your own wandering biases, and aiming to engage in critical thinking in order to challenge what you may want to be true with a mirror of actual facts and evidence. It continues with maintaining a sense of wonder, always keeping your faith, instincts, and intuition close at hand, lending soulfulness to the truth you may uncover while instilling compassionate understanding as you pass it on.

Easter has a history that encompasses so much in our culture, from the religious to the secular to everyday meaning and symbolism.  For those of you nerds and history buffs interested in what’s behind the naming of Easter, there are these tidbits about its complicated origins from the Venerable Bede (673-735), an English monk who wrote the first history of Christianity in England. He’s one of our main sources of knowledge about early Anglo-Saxon culture. In Detemporum ratione (On the Reckoning of Time, c. 730), Bede wrote this:

In olden times the English people—for it did not seem fitting that I should speak of other nations’ observance of the year and yet be silent about my own  nation’s—calculated their months according to the course of the Moon. Hence, after the manner of the Greeks and the Romans, [the months] take their name from the Moon, for the Moon is called mona and the month monath. The first month, which the Latins call January, is Giuli; February is called Solmonath; March Hrethmonath; April, Eosturmonath … Eosturmonath has a name which is now translated “Paschal month” and which was once called after a goddess of theirs named Eostre, whose feasts were celebrated in that month. Now they designate that Paschal season by her name, calling the joys of the new rite by the time-honored name of the old observance.

Ok, those of you who are not so nerdy nor considered to be buffs of history may be glossy-eyed by now; so let me continue…

Whether we trace its roots to the course of the moon or other cultures or Christianity or pagan influences, the season of Easter (coinciding with Spring) has always been about rebirth and renewal. In other words, taking that which once had life in it, yet is now lifeless, and bringing it back to a living existence. Of course, it’s not exactly the same as what it was before. It may be a crocus or a daffodil that returns in the Spring every year, but it’s not the same flower that grew the previous year nor any year prior. It’s reborn as a new organism…yes, similar to what it was, even sharing the genetic makeup of its earlier incarnations, but still uniquely different.

We currently live in an age of coronavirus, COVID-19, quarantine, and social distancing. For most of us, we live in the same country we did last year. We may live in the same city or the same house as before. We still have those we call family and friends. Yet, something has changed. Things and ways and realities that once were, are no more. They are…lifeless…suddenly non-existent in our lives.

Yet, a new season is arriving. New life is stirring beneath the ground, above our heads, all around us…and within us. What was cannot be returned to; what is continues to grow; and what becomes (particularly of us and this new existence), well…that’s something we have a part in shaping as co-creators in this life.

We have many observances that have been inextricably changed by this pandemic: baseball’s Opening Day, senior graduations, birthdays, anniversaries…and yes, Easter. In the words of the Venerable Bebe, “the time-honored name of the old observance” will remain with these rites, yet they will be different…it will be new.

Let us work to make the new (as many already have) as meaningful in its newness as the rites and observances we’ve cherished all along this life’s journey.

So…peace, sanity, love, and joy to all you fellow sojourners as we continue to create the new from this present and soon to be past reality.

It’s a new year! New beginnings can sometimes bring along with them a bit of the ”same old, same old” in tow as baggage. It’s our choice whether to winnow away some of that baggage or just try to keep it at bay and hope it doesn’t crowd our path. Of course, new year resolutions are often one of those mechanisms we use to deal with old baggage. The truth is, they can sputter and fizzle out as the days and weeks go by while we scheme to simply do something different or new…to make a change.

We’re still in our first official month of winter that began way back with the Winter Solstice on Dec. 21. The word solstice is derived from the Latin sol (“sun”) and sistere (“to stand still”). That’s because at the solstices, the sun’s declination appears to stand still. That is, the seasonal movement of the sun’s daily path (as seen from earth) stops at a northern or southern limit before reversing direction.

Sometimes, as we’re looking to make improvements or change directions in our lives, we first need to step back at the proper moments and simply stand still. Being still, observing and taking inventory is often more important than the diving in and taking action to accomplish what we think needs to be done. That’s because what needs to be done may not be as obvious as we believe and can even ironically get lost in our whirlwind of activity trying to address it.

This past month has also been the season of Christmas which, in contrast to its historical roots with the singing of “Silent Night” and the like, is perhaps the least still and silent season of the year! Though, if you follow the Western Christian calendar, you’ll notice that the 12th day of Christmas actually concluded on Jan. 5, and the day of Epiphany (meaning to “reveal,” “show,” or “bring to light”) has now emerged. We can even notice the days slowly becoming brighter and longer…at least if we stand still long enough to look intently at the workings of this world around us.

Well, the solstice has long past and the sun has been on the move, but that doesn’t necessarily mean you need to be. So, as we enter a new decade (depending on how you count it), take some time to stand still and let the light in. It just might give you the opportunity to see with clearer vision and insight as you navigate this year of 2020 and well beyond.

Are you looking for some company with whom you can aimfully wander this path of life, faith and spirituality? Well, this is a place for those with a wayfaring spirit to learn, question, share, laugh, cry, work, play, support, honor, eat and drink in this journey of life together.

We are a collection of smaller Dinner Gatherings that take place in welcoming homes throughout the Greater Milwaukee, WI area as far south as Kenosha and as far north as Port Washington. We also occasionally bring all the groups together for a larger Collective Gathering in Milwaukee. Feel free to navigate this website to learn more about us and what we do.

So, welcome to all you wayfarers out there open to sharing a delectable meal and looking for a safe and encouraging place to explore confounding life questions as we seek deeper spiritual meaning from our existence. We are part of a common journey as children of wonder in an ancient land as it passes through this timeworn universe.

Whew…that sounds profoundly intense, but don’t worry! We know how to have fun while we relax and enjoy the ride as well. So come on board, buckle in, and let’s see where this existential bus takes us together!